We have Chimpo pulling out the tunes for this month’s Don’t Mix That mix giving you (in his own words) – “an absolute madness multi-genre mash up that could possibly cause your ears to fall off” . LOL

Stream/Download Chimpo’s Don’t Mix That below…

Also peep the interview after the mix – POW!

First things first – where did the name “Chimpo” come from, I’m rather intrigued?
I got it from a film called ‘Super Troopers’. At the time i was in a crew called Northern Monkeys and I always considered myself quite monkey-like.

As I understand you’ve been taken under wing of Mr. Dave Jones aka Zed Bias?
Yeh Zeds helped me a lot. We’re both fans of each others music and I’ve spent a lot of time in his studio, learning stuff, collaborating and just chilling.

Do you have a process when you going to make music
Nah, it’s different every time

I keep seeing MCR at the end of people’s name. I’m gonna go ahead assume it’s something to do with Manchester. Care to clear & clarify this up for me?
MCR is short for Manchester, like LDN is London. Mancs are generally quite proud of the city so you’ll see it a lot

Right i’m bored of these conventional music questions, here at Don’t Watch That there are no rules. Fuck it.

Best music to have sex to?
ahahahahah Chimpo – Slow and Easy

Bit of a random one but Fila or Reebok?
Fila

Manchester or Jamaica?
Manchester over everything. But if someone can get me to Jamaica, then Jamaica init

Strategy or Skittles? Lol
Skittles for the hairdo. Strategy for the teeth

Best event you played at?
Don’t panic, Wigan in August where I dressed up as Santa and they let off a snow machine on my first tune

Bad habit?
Ask Fox. It will take all week

What can we expect from Chimpo this year?
Release-wise, ‘Blowfish’ on Estate, ‘Gaza’ with Trigga on True Tiger, Swing Ting and Fox ‘Head Gone’ remix on Fat City should all drop in the next month or two. I’ve done an album with Fox and have collaborations with Dub Phizix, Broke n English, Skeptical, Trigga, Jenna G and Skittles. Recently I’ve been making some Drum n Bass and hopefully have a 12” forthcoming on Soul:r. I’ve also been vocaling some tracks and realized the other night that I can sing really high pitched, which is insane. I’m also going to continue to try and get a monkey that I can bring out raving with me

Thanks for that geez, your free to go

Hit Chimpo up on his twitter & check out his soundcloud. Definitely someone to watch for this year! 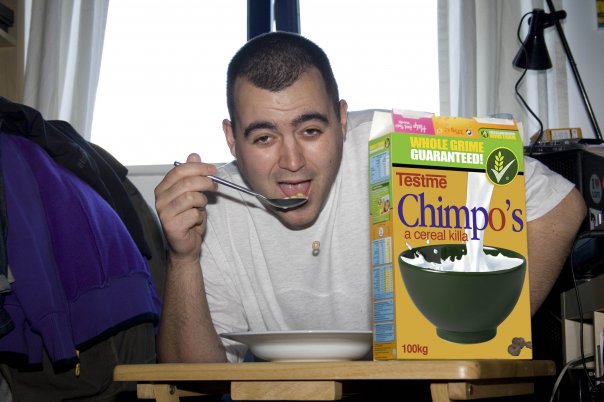